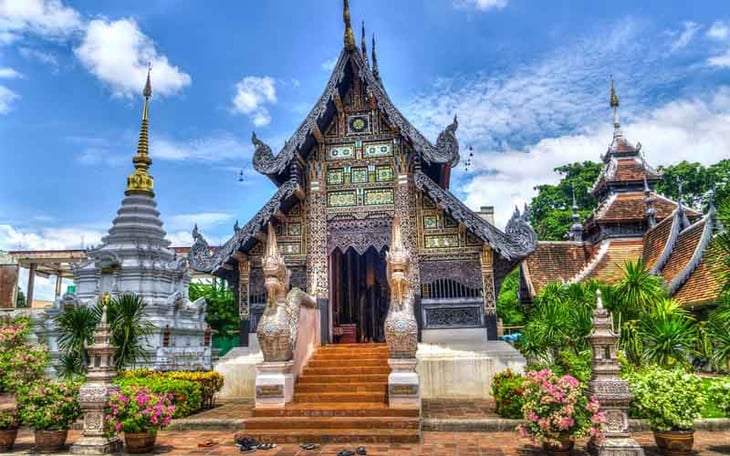 Moving to a new country, where you can’t speak the language, where foods, sights and smells are all new was never going to be easy. However after eight months of research, planning and selling everything, my girlfriend and I knew as much as we could know in this short period of time.

In August 2013, my girlfriend and I decided enough was enough, we were over the corporate world and were going to step completely out of our comfort zones, move to Thailand and study to be English teachers.

The Craziness of Phnom Penh

Landing in Phnom Penh and heading through the crazy traffic after dark was quite an adventure. Actually completely terrifying explains it better. Traffic is a complete beast in Phnom Penh. It is always busy with a combination of cars and tuk tuks and hundreds of thousands of motorbikes and scooters. The large amount of traffic would be bad enough if everyone followed the traffic rules. However, this isn’t something that happens, but it strangely just works. Everyone just seems to do their own thing, without causing too many concerns.

We spent three weeks in Phnom Penh, a week of holiday and then two weeks of our TEFL course with International TEFL Academy before moving onto Thailand. There were a few moments of second-guessing our decision, but we always knew that moving to Thailand to be English teachers was definitely not going to be a regret.

Adjusting to a New Home

Deciding where to settle down in Thailand once our course was completed was pretty much decided when we were still in South Africa. The allure of a beach town did distract us for a couple of days, but eventually we went back to our original choice of Chiang Mai.

Chiang Mai is located in the north of Thailand. With a cooler climate (I use the word cooler liberally as it is still hot, just not as hot as down south) and stunning mountainous scenery Chiang Mai is an awesome place.

A Place to Stay and the Food

We have settled down into a relatively normal life. We are renting a fully furnished condo for a fraction of the cost that we would pay back home and not living in a mud hut like many thought would happen back home. We have also purchased a scooter to get around town.

One big difference to home is not making dinner in our kitchen as we did back home. We now eat out every evening. Whether we are picking up some street food, popping in at a cheap restaurant or visiting the food hall at our local Tescos; we are always having dinner somewhere other than making it in our own kitchen.

This is due to two factors. The most important one being that we don’t have a fully-functional kitchen. We have an area in our condo that is like a kitchen, but isn’t a western kitchen. We have a fridge, kettle, and toaster. So basically we can keep the beer cold, make a cup of coffee and have some peanut butter toast if we are hungry late at night.

The other factor is that the cost of food is so cheap. We can eat dinner for under 100 baht (that’s for the two of us) and this is what we do during the week, and then sometimes splash out on something a bit more expensive on the weekend.

The food is interesting, strange, and amazing. Going to the markets you will see all kinds of things being prepared. We have stuck to the things that we can identify and haven’t ventured into the really strange things. Time will tell if we ever will.

Chiang Mai is filled to the brim with awesome restaurants and tons of coffee shops. The variety of food is endless with the obvious Thai at the top of the list, closely followed by America, Mexican, Indian, Italian, Japanese, Vegetarian, the list goes on.

Apart from visiting the many restaurants and coffee shops there are so many other things to do in and around Chiang Mai. From temples, to trekking, botanical gardens etc.

Not All Sunshine and Roses, But Worth It!

After reading this article you would think that everything is perfect and it is all sunshine and roses. However, even though Chiang Mai is awesome and we are loving it, life abroad can also be frustrating at times.

Learning the language will help! Apart from two weeks of Thai language lessons during our TEFL course I have been terrible about trying to learn more Thai. Which can be frustrating when trying to converse with anyone really. Trying to figure out how to pay an electricity bill, get a scooter fixed, order food (sometimes), figure out what food is being sold at the market when the signs are in Thai. This is one of the reasons that I am signing up for Thai lessons soon!

Of cause things aren’t like home so things that I am used to doing a certain way, isn’t going to work in Thailand. However these are small frustrations that I will gladly put up with!

Collen Kriel is 33, from Johannesburg, South Africa with diplomas in Sales Management, Business Management, and a certificate in Digital Marketing. He was an Account Manager in a multi-national IT company before deciding to embrace a different way of life and hopping on a plane with his girlfriend to teach English in Thailand.