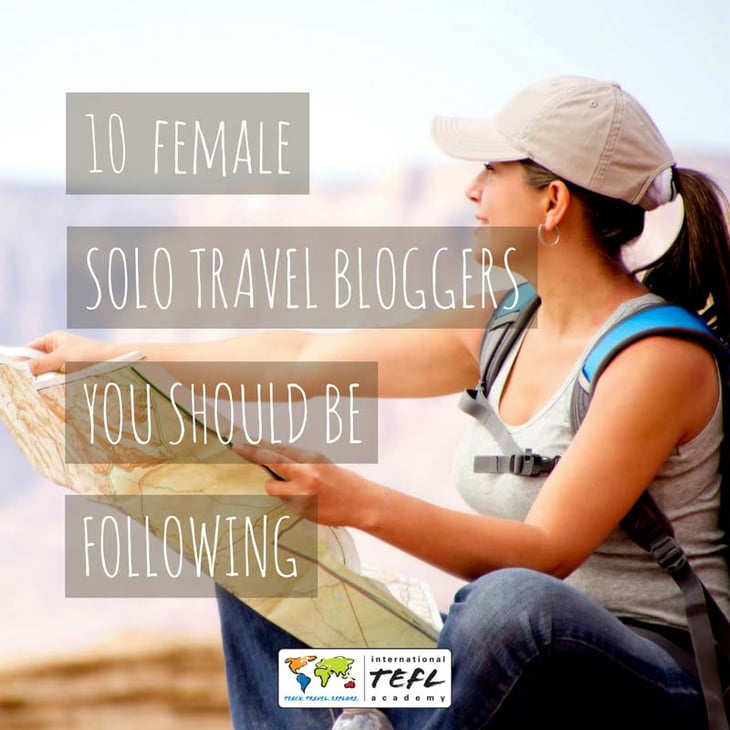 Want to teach English abroad and see the world on your own terms, but find yourself holding back for whatever reason? Perhaps you’re concerned about your safety, being lonely and outside of your comfort zone, or missing family and friends while abroad.

Take a read of these awesome female solo travel blogs to give you all the confidence and inspiration you need to bite the bullet and start living your wanderlust-filled dreams. After getting lost in their epic tales of adventure and new experiences, you won’t be able to keep your butt in your seat for much longer!

At age 26, Kate quit her job to travel Southeast Asia for six months. Six months turned into five years, spanning across more than 65 countries. If there's an adventure out there, she will go for it. Kate started her blog to show what it is like for women to travel solo. She believes it is best to teach by example, and her ultimate goal is to show women that independent and solo travel can be safe, easy, and a lot of fun.

If Nadine's face looks familiar, you may have seen her talking travel on her popular YouTube channel, Hey Nadine. She has traveled to 49 countries over the last six years, and her experiences have been recorded and documented across her blog and YouTube channel. Her videos are fun, light-hearted, and often include a side of humor to keep you smiling. In December of 2014, Nadine was invited to the White House as one of the Top 130 most influential travel bloggers and digital media outlets to attend the White House Travel Blogger Summit on Study Abroad and Global Citizenship.

3. Kiersten Rich OF the blonde abroad

After graduating with honors and getting a job at a prestigious financial firm in LA, Kiersten realized she was living someone else's dream and needed to escape the corporate routine. She left her career to travel the world, volunteer in developing countries, and discover her own happily ever after. Since then, she has traveled to 50 countries and hopes to inspire others to live a life they love and settle for nothing less than extraordinary.

After getting a handle on a case of severe anxiety, Annette made a promise to herself to not let fear make decisions for her. As a result, she started saying yes instead of no to opportunities that presented themselves. That promise, along with her dedication to start living her bucket list, led her to making travel a second career. She has been on Safari through Africa, eaten insects in Thailand, zip-lined through the Costa Rican rain forest, swam with pigs in the Bahamas, bathed elephants at a recuse in Chiang Rai... the (bucket) list goes on!

5. Amanda Williams OF a dangerous business

As a kid, growing up on a Christmas Tree farm in a small, Ohio town didn't provide Amanda with much excitement. It wasn't until high school that she decided she wanted to travel, and a Lord of the Rings obsession is what let her to New Zealand after graduation. Since then, she has been to more than 45 countries and is always on the lookout for her next adventure. Amanda is a strong believer that when it comes to travel, there's no right or wrong way to do it. She's never given up on her "normal" life to travel long term and wants others to see that they don't have to quit their job or leave their loved ones behind in order to be a traveler. She hopes her blog and her stories will help convince you of that!

Born and raised in Seoul, South Korea, Juno says leaving her job as a mechanical engineer to become a full-time travel blogger was one of the most difficult decisions that she ever made. As a Korean who grew up in a conservative household, her career departure created enough shock to change everything in her life, including her relationship with her own family. Fast forward to now, and after six years of full-time travel, Juno says she has grown. She has a deeper understand of people now that she would have never learned if she stayed at home working as an engineer. Her travels also helped her grow to respect her own culture and realize the importance of family.

In the middle of a long, grey British winter, Dani decided to break free and fly to Las Vegas on the first leg of what she thought would be a year-long trip around the world. Seven years later, and this one year trip turned into a global exploration without an end date. Having lived in Austria, Spain, and England, Dani combines months of rapid travel with longer stays, living as a local wherever she can. She shares stories related to what it's like to be a gay or lesbian traveler, and also publishes guest posts by fellow LGBTQ travelers who share their travel stories and experiences as well. Her mission is to inspire curiosity about the world and provide the tips and tools to help you see as much of the world as you can for yourself.

8. Alexandra Baackes OF Alex in Wanderland

Alex in Wanderland was created in 2009 as a means for Alex to document her two month trip to Southeast Asia. The night before she left, she cried; terrified over the thought of eating dinner alone, getting lost in the airport, and having her camera stolen. That summer, she fell head-over-flip-flops in love with the adrenaline of travel and realized that there are truly people out there living the nomadic lifestyle that she thought only existed in her head. In 2011, Alex left New York to travel full time, and she has not had a permanent address since. There's no date, no itinerary, no real backup plan. Just adventure, adrenaline, and a lifetime of globe-trotting daydreams to fulfill.

Otts World is Sherry's journey from traditional cubicle to travel writer and digital nomad. She quit her corporate IT job in 2006, with the original intention of simply taking a year-long career break. In this time, Sherry traveled to 23 countries, finding a new and exciting world outside her office walls. Her eyes were opened to possibilities and the beauty of simplicity, so she sold all her possessions and relocated to Vietnam where she supported herself through teaching ESL, selling photography, and started working at building a blogging presence. Sherry is currently in her mid 40's and has spent over a decade living out of a suitcase with no permanent address since 2006.

Liz started her travel blog back in 2010 when she was getting ready to move to Spain to teach English and procrastinate on life. She lived on and off in Spain for over three years (Salamanca, Córdoba, and La Rioja) before learning that being a professional travel blogger was actually a thing. This prompted her move back into her parent's attic outside of Washington D.C. to work for a year, build out her blog properly, find work online, and save money. After having saved up enough, Liz walked into her boss' office, quit her job, moved to New Zealand and began full-time blogging. It is here that she developed a deep and abiding love for men in stubbies and gumboots. She hasn't been deported yet and hasn't looked back since!

At International TEFL Academy, we are fortunate that our alumni include fantastic bloggers who are teaching across the globe. You can finds dozens listed - along with interviews, features & videos - on our Alumni Stories pages for Asia, Europe, Latin America & the Middle East.

Here are just some top examples to inspire you: