Top 13 Halloween Celebrations Around The World While Teaching English 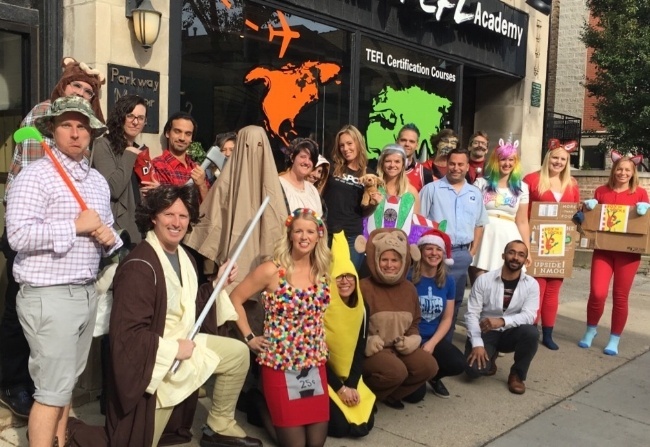 The leaves have turned, the air is crisp and spooky jack-o-lanterns are popping up around the neighborhood, which means that Halloween is around the corner!  If you think that you would miss out on the fun while teaching English abroad, think again! Yes! Many countries around the globe celebrate Halloween, which is one of the world’s oldest holidays, dating back to pagan times. From costumes and “trick-or-treating” to delicious food and parties, you can celebrate Halloween anywhere in the world!

So where will you be celebrating Halloween next year?

Just a little bit of history…

One of the oldest holidays in the world, Halloween’s origins are rooted in the ancient Celtic Festival of Samhain, which commemorated the ancient Celtic New Year on November 1st. This day marked the end of summer and the harvest, and also, the beginning of the cold winter, a time of a year associated with darkness and death. The ancient Celts believed that the night before the “New Year”, which is October 31st, the boundaries between the worlds of the living and the dead overlapped and the ghosts of the dead returned to earth, causing trouble and damaging crops. Celebrations included the building of bonfires, animal sacrifices and dressing up in costumes.  After the Romans conquered Ireland and the British Isles during the 1st century A.D., the celebrations were combined with the Roman festival of Feralia, which commemorated the passing of the dead and following the advent of Christianity, the holiday became associated with "All Souls Day," which also celebrated the dead.

In the U.S., early celebrations of Halloween were limited in colonial New England, but in Maryland and southern colonies in the United States, people gathered to celebrate the harvest and share histories of the dead, tell each other’s fortune and to sing traditional songs and hymns. During the second half of the nineteenth century the US received millions of new Irish immigrants who brought their Celtic-rooted Halloween traditions with them, including dressing in costume and going door-to-door to ask for "tricks or treats!" By the end of the 19th century, the holiday had become a largely secular celebration incorporating costumes, trick-or-treating and the preparation of special seasonal foods and drinks.

So… where is the fun?

Like nearly everything else, Halloween has gone global and the traditions of costumes, candy and trick-or-treating can found in nations across the globe.  In addition, many nations and cultures claim their own holidays that celebrate the dead, incorporate costume-wearing, pranks and other elements that are associated with Halloween in the U.S. and the British Isles. To learn how and where you can discover the many traditions of Halloween and similar celebrations around the world, read on....

During Halloween, the district of Itaewon in the heart of Seoul closes its streets to automobile traffic and various booths are set up to prepare for a wide variety of festivities, including live music, costume contests, and plenty of drinking. In addition, the majority of the restaurants, clubs and bars in this neighborhood put on different events where expats and Koreans gather for late nights of carousing and dancing - all in costume, of course!!!

Koreans also hold their parallel Halloween celebration called “Chusok,” which is held at the end of August and beginning of September, when families get together to thank relatives that have passed away offering altars with fruits, rice and prayers.

Halloween is a very popular celebration among Americans, Canadians and other expatriates living in Beijing, Shanghai and other major cities like Hong Kong, where festive parties can found throughout the city. The locals also celebrate a festival known as Teng Chieh (The Festival of the Hungry Ghosts) where food and water are placed in front of photographs of family members who have departed; also lanterns are lit to light the paths for spirits wandering the earth on the festival's eve.

Many Japanese youth are fond of dressing in costume and throughout major cities, locals and expats gather for boisterous Halloween celebrations.  In addition, the Japanese celebrate the Obon Festival, also known as “Matsuri” or “Urabon”, which is similar to Halloween in that it’s dedicated to the spirits of ancestors, and takes place during July or August.

During the Filipino version of Halloween, known as Pangagaluluwa, children pass from house to house offering a song in exchange for food, candies or money. The meaning of this tradition is that the kids sings for the souls of those who are still in the purgatory to help them to go to heaven.

“The Souls Day” on November 1st is celebrated in Italy with traditional food and customs. One of the favorite preparations is “Fave dei Morti” a traditional cookie recipe that is offered as a ritual offering to the dead and gods of the nether world.

American-style Halloween is a new phenomenon in Spain, but its popularity is growing among children and university students, and of course, it is enthusiastically celebrated by thousands of foreign English teachers from the U.S., U.K. and other major English-speaking nations.  Some towns are decorated and parties are held throughout different cities.

The Catholic feast of All Souls Day has been marked for centuries and October 31st is known locally as “El Día de las Brujas” (Day of the Witches). In addition, the day is known as “The day of the Pumpkins” in the northwest region of Galicia and also as “Dia de los muertos” (Day of the death).

“The Day of the Dead” is called “Dušičky,” which many Czechs mark by visiting cemeteries and graves of departed loved ones. Another old Czech tradition is to place chairs around the fireplace on Halloween night - for each living family member and one for the spirit of each departed family member!

Most Thais don't know about Halloween, let alone participate in it, but the country's huge expatriate population celebrates it with great fervor and in Bangkok, major nightlife spots like Silom Soi 4 and Sukhumvit Road come alive as hundreds of bars and nightclubs throw special Halloween bashes. The holiday has become a particular favorite of the local gay and lesbian community though certainly all are welcome!

In Greece, Halloween is celebrated primarily by expatriates and tourists in hotels and bars. However, Greeks do celebrate a similar event “The Apokrias,” which takes place in February when children dress up in costume and call upon their friends to see if they can guess their identities.  “Treats” like cake and sweets are also handed out in and in large cities, Carnival-like parades are held along major streets. And did you know? Greeks have their own recipe for “Greek Pumpkin Pie” called “Kolokythopita”!

Halloween celebrations are somewhat new in Germany, but old traditions associated with All Souls Day include putting away knives on Halloween night to prevent harm from returning spirits. Today, in major cities, particularly university towns, local youth and expatriate English teachers enjoy dressing up and getting together for drinks and parties in a variety of local clubs and bars. It's a perfect time to whip out that old Beethoven costume!

Halloween celebrations are becoming increasingly popular in Chile, particularly in major cities like Santiago, where shops, supermarkets, and malls break out special decorations and kids just love to wear costumes and knock on the doors of their neighbors asking for candy. In addition, clubs, pubs and bars organize a variety of colorful parties and events, including costume contests and masquerades parties.  On November 1st many families mark “All Saint Days” (El Día de todos los Santos) by visiting the cemetery to place flowers on graves, and also balloons or teddy bears to decorate the tombs of children. It’s a time of reconnection and remembrance for those who have departed life on earth.

Even if it isn’t a major holiday in the land of Carnival expatriates in Brazil do celebrate Halloween and many locals are more than happy to join the party!  Local flavor includes caipirinhas, batucadas and colorful parades with drum music! It can be easy to find a Halloween party as most of the restaurants, bars and clubs in Rio de Janeiro and especially in the Lapa district prepare special Halloween nights and spooky festivities, so join the fun!

Among many Spanish countries Halloween is known as “El Día de los Muertos” (the day of the dead), and incorporates a three-day celebration that begins on October 31st and culminates in November 2nd.  It’s the time of the year when families remember their dead and the continuity of life. It’s also time when monarch butterflies are returning to Mexico from the north, and are thought to bear the spirits of the dearly departed who are coming home. Families set up altars with flowers, bread and candies next to pictures of family members.