How Can Newlyweds Build a Family Teaching English in China?

I knew a long time ago that I wanted to travel. I also knew that the best way to do this practically would be to get a job teaching English. So I did my research, and since I am so far from a major city, chose to take an online class with International TEFL Academy at the same time I finished my university degree. It was then that I started searching for my first country of adventure.

I first arrived in Harbin, China, with my husband and my cat. We were tired, stressed out, sick, and lonely. Our trip had been difficult, and we were relieved to finally make it to our new home. One of the first things we did after moving in was to find a restaurant to become regulars at, to get that familiar ‘homey’ feeling back in our lives. Our restaurant of choice was a Chinese-Korean place not two minutes from our doorstep. This is where we met the one person who has made the most difference in our lives and perspectives since we’ve been in China. His name is Shu Jong, and whether you believe in this sort of thing or not, I am convinced he is an angel.

His food is delicious; no one smokes, and the atmosphere is quite cozy, which is what kept us coming back after the first time. After about two weeks of our returning at least every other day (and likely prompted by my appalling attempts to speak Chinese),he spoke to us using a little English. We were quite stunned, because you see, almost no one you meet outside of school speaks English. At the time, we were heavily reliant on charades and the phrase “We don’t speak Chinese” in Mandarin! (Our pronunciation of that is now quite good.) Well he made it quite clear he wanted to be friends, and we began to chat and have beer together every time we returned. We taught him more English; he taught us Chinese and we laughed. Not long after, he informed us that friends do not pay and refused to let us pay for the food and beer.

I think he knew we were very poor, and since we had just gotten married before we left and used all our money to fly here, we certainly were poor. He invited us to his home, then for dinner with his (very large and loving) family where were we were introduced and fed until we almost burst. The amount of trouble his family went to in preparing the food must have been enormous. The table was filled with plates and plates of food. When one was finished, another took its place filled with something new. They even made salad, which the Chinese don’t eat, just because they knew we enjoyed it. They didn’t speak English at all, but that just made it funny.

Not only do we just hang out and enjoy each other’s company: he is always more than willing to help us out when we need it. We had to move suddenly and find somewhere else to live when I was very sick. When he found out, he insisted on borrowing his sister’s car to help us move. He found someone to watch his restaurant and even got a friend with a truck to show up and help us move as well! We were physically unable to stop him from helping us pack and load the truck. We insisted he had done enough, but he just ignored us, grabbed a box, and shoved his way out the door! As he moved things with my husband, he put me in his restaurant and gave me seaweed and tofu soup to help me feel better and bought me medicine after.

We join his family for holidays now to drink beer, set off fireworks, and ‘play charades’, and even though we had to move from next door, we still make it a point to visit him every week and chat or take him out. We go to KTV and even shopping with him sometimes. We plan to travel to Beijing (one of his favorite places) together so he can show us around, and we plan to bring him back to America to visit.

We still bring enough money to pay for our meals and our cab every time we visit him even though he refuses to allow it. So instead now, we take him out to eat at other places and give him gifts. He accepts this and it makes us happy. We will never be able to repay him for the kindness he has showed us, the feeling of family he gives us, and especially the food he has fed us! It just amazes me that we can be such good friends when we can barely communicate with each other.

At the same time, it gives me a lot of faith in humanity. I didn’t know people this nice existed in the world, but I’m so happy that they do and that I found one of them in Harbin, China! He is just one of a number of unimaginably friendly people here, and I never would have known him or the other kind people of Harbin if I hadn’t traveled here. I know we gained a lifelong friend and an entire Chinese family. If I gave someone only one piece of advice when they travel overseas, it would be that they make friends with some locals, even when you don’t speak the language. Everyone just laughs at poor English and bad Chinese and enjoys the company anyway. It is a unique kind of bonding when you can’t talk to someone but you can be friends anyway. This made China quite special to me and made the decision easy to stay here for a long time.

Chelseigh Robinson is a 25-year-old East Tennessee State University graduate with a bachelor’s degree in Music Education and Chemistry Education. After graduation, she moved with her husband and cat to China, where she teaches English, Science, and Math. 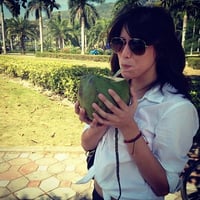