Navigating the LGBTQ+ Community in Taiwan 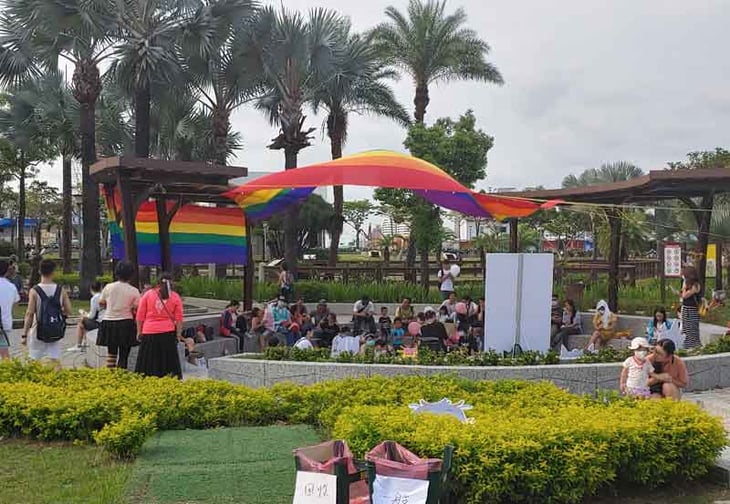 My name is Dawn, and I moved to Taiwan in August of 2020. Before my move, I was a professor at a college in Boston, living a comfortable life. I have always enjoyed traveling and moving abroad has always been a dream of mine. After my grandmother passed away in 2019, I decided to make this dream a reality. I began talking to a former co-worker who has been an ex-pat for years, and he recommended that I take my TEFL certification through ITA. After taking the course, I went to a job fair through ISS in New York City, just as Covid was hitting in China.

As a gay woman, I needed to live in an environment where I felt accepted and comfortable. I had numerous interviews with schools in Taiwan and researched the LGBTQ community there and it seemed like a great match. According to the information online, Taiwan is one of the most open countries in Asia for the LGBTQ community.

After arriving and completing quarantine, I attended a Pride event within the first month of being in Taiwan. Taoyuan Pride was a fantastic event to see how a different culture celebrates our community. The language barrier has been a challenge to get to know locals and makes it difficult to meet people. Although I have been able to communicate with some people, I often find Taiwanese people can speak some English, but understanding what you're saying is a different story. A month later, I attended Taipei Pride which was a more significant event. There were more events to go to in Taipei that night, but I ended up falling asleep instead of attending a club event.

Being a foreigner in the LGBTQ world out here is challenging, especially if you are older and don't like to go to bars. The foreign community is non-existent, especially where I live in Taichung. I have reached out to others on social media, and they say the same thing. I have been able to meet some friends, but it is vastly different from the states. I have started a blog about my journey, which has helped me express my feelings and connect to some people here, but not many. The Taiwanese LGBTQ community seems to stick together, and it seems difficult to meet others in their circle. I was able to find a Zen Buddhist group that has LGBTQ members in it but due to the distance (Taipei is a 2-hour drive from Taichung) and the expenses of traveling to Taipei, I have only been to the group once.

As far as my job, some co-workers know about my sexuality. Even though Taiwan is considered open to the LGBTQ community, it is still very conservative. The younger generation seems to be more accepting, but you must be careful when working with children and their parents. The other Taiwanese counselor and I started a group for students questioning their sexuality. We kept it confidential because, unfortunately, if parents found out about their child attending this group, there could be severe consequences for the children involved.

After writing this, I realize that this is not how Taiwan is perceived globally, but I want to be honest. Finding LGBTQ friends is one aspect of my life that hasn't been the best, but for the most part, I have enjoyed my time in Taiwan. I have been able to travel around the island, experiencing a way of life that is foreign to me. I've done some fantastic things from hiking to rock climbing and swimming in the Pacific Ocean while other people have been in lockdown. There is a reason that I am here, and I feel blessed to be here in this moment where I have the freedom to live my life.

I encourage anyone thinking about moving abroad to reach out to LGBTQ ex-pats in that country and discuss what the scene is like in the area you will live in. If you are a community member and want to move to Taipei, I would encourage you to research the place you will live. Taipei seems more LGBTQ-friendly than Taichung, but doing your research is the best way to find out.

To find out more about my journey you can check out my blog here or follow me on Instagram @agaygirlinanexpatworld.

Dawn is a 45-year-old woman from Massachusetts. She has her BS in Psychology and teaching licenses in both special education and history (grades 5-12). She also has a school counseling license. Dawn graduated with her doctorate in Education in 2015. She was a professor in Boston before moving to Taichung, Taiwan to be a school counselor in August of 2020