On Her Way: My Beginnings in Vietnam - Teaching English Abroad 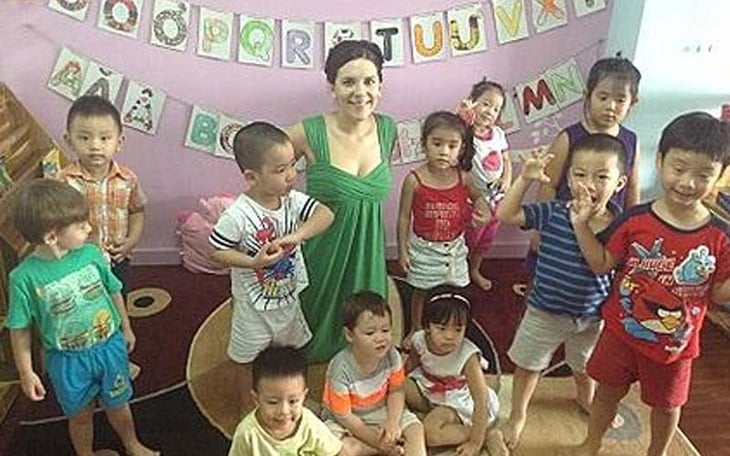 When I stepped off the plane the heat was unbelievable. The airport wasn’t air-conditioned and no matter how much I had read about the heat in southern Vietnam I wasn’t prepared. Beads of sweat collected on my brow and I couldn’t believe I would soon be lugging my huge duffel bag along with my backpacking backpack, laptop bag, and my rolling bag to a taxi, a taxi that I would somehow need to acquire with my extremely limited Vietnamese. I took a deep breath and went into the bathroom to collect myself. There, in the presumed safety of the stall, I rearranged my money and my belongings and attempted to get a grip on myself. I think this was the first time that it hit me. There I was, further from home than I had ever been in my life and I was completely alone.

No one in that stifling airport knew me, no one was waiting. It wasn’t as if I had never traveled alone before, frankly that was rather old hat by now, but this was the first time I was on another continent across the Pacific Ocean in a country where most people didn’t speak English by myself. This was the first time I would really get to test my own ability to be truly independent and self-sufficient and I was terrified.

After exchanging money and finding a cab I was met with a new challenge, the address of my homestay was incomplete and I was without a telephone so I was unable to call to find out what the proper address was. To say the least, this was rather disconcerting and I could feel the fear start to boil up from within again. However, in spite of my fear, I managed to get one of the airport personnel to give me the wifi password and I was able to find the full address buried in an old email. I’m sure even mentioning something so trivial sounds rather silly but I can’t stress enough that when you are maneuvering in a foreign country having never been outside of North America before and most people don’t speak English every success, however small, is worth celebrating.

Leaving the airport there were dozens of people standing in a mob and I made my way to the proper cab feeling a little overwhelmed. Later I found out that this is pretty standard and frankly anywhere you go that has tourists in Saigon (also called Ho Chi Minh City or HCMC in shorthand)there are bound to be a lot of locals selling their wares and services. My cabbie spoke no English and the electronic translator I brought with me was mostly useless due to Vietnamese being a tonal language and the voice on my translator being so robotic and quick so we drove in silence. The city of Saigon grew around me as we drove and flocks of motorbikes accompanied us everywhere we went. I took pictures and videos knowing both that I wanted to remember these moments where this city was so fresh and new and also that I would have difficulty conveying the real feel of being here. In retrospect those pictures and videos do Saigon no justice because you cannot feel the whir of the city swell around you, its heat, its stink, its life.

When the cabbie finally found the alley where my homestay was located I had no idea where to go. My homestay was in district 8 and as district 8 had mostly native Vietnamese inhabitants it was a bit different than the more traditionally Western districts like 2 or 7 or the tourist oriented district 1 where the streets were better paved and the houses less close together. My cabbie helped me to drag my bags to my homestay, the house is gated and I don’t initially recognize anyone.

Was I at the wrong place? How would I possibly find the right place without a phone?

I was welcomed into a room with both numerous motorbikes parked inside as well as a sitting area which I would come to learn is normal in the city. My host (the only person in her family who spoke English) appeared suddenly and directed me to my room. Her home was hot due to the lack of air-conditioning and that, coupled with my huge bags and total jetlag along with the seemingly endless stairs I had to climb to get to my room, felt like torture.

Once all of my bags were in my room (luckily my host’s brother helped me) I joyfully discovered that my room indeed had air-conditioning, something that I never truly appreciated before coming to Southeast Asia. It felt amazing to think that just a few short months before I had just started my online TEFL certification course with the International TEFL Academy and yet here I was now in Vietnam and that felt like eons ago. And just like that air-conditioning came to life and I fell into a deep sleep. It was 3 p.m. on a Thursday and I wouldn’t wake up for twelve hours but I had made it and that was half the battle.

Jacklynn Blanchard is a 24-year-old writer and hails from Littleton, Colorado where she has lived on-and-off for the past 14 years. Before moving to Saigon to teach English, she worked as a hostess at an upscale Mexican restaurant, a caregiver at an assisted living home, a nanny, an editorial assistant, a reporter, an Early Vote Organizer, and a babysitter. She has her Bachelor’s degree in English from The University of Colorado at Boulder and graduated with honors.