What's Next? Fighting the Travel Bug After Teaching English Abroad

I sat there staring into space, holding my pen to my lip, my eyes glued to nothing. I was daydreaming again. Dreaming of trying to communicate in a new language, trying new foods, standing in a new place, long bus rides, and uncomfortable hostel beds. I wanted it back: life abroad.

I had just returned from two years teaching in Bangkok, Thailand. I had a new job, cool co-workers, and an apartment downtown. I liked my job; it was in cultural exchange, and I was helping build bridges between cultures, foster understanding and getting international students and trainees to the US. I was seeing people experience life abroad for the first time, and it was so rewarding. But something was missing. As I watched the excited faces across from me on Skype prepare for their journeys abroad.. I couldn’t help but think "why am I not abroad?'

When I left to teach English abroad, everyone just thought it was a phase; they thought I was young and young enough to do it and eventually I would return and get a real job. And while I was there, I couldn’t get that out of my head. “Was what I was doing not real?” Yes, it was! I was a real teacher. I worked real hours, made real money, rented an apartment and lived in a new city, so I decided to stay a second year. But, as the second year came to an end, I felt the pressure from society to return to “real life” so I settled back in Chicago. I got my job and tried to move on & readjust to life in the U.S.

Besides constantly daydreaming and having intense deja-vu, I was bored.  I hated being able to tell taxi drivers where to go with no struggle or no laughs or ending up in the right place so easily. I hated that no food was spicy enough, and I missed my students. I missed seeing their smiling faces everyday, hearing them whisper to me in Japanese and laughing at me when I tried to speak it or yelling TEACHER NO JAPANESE.

So for almost a year, I stayed put. I watched as the seasons changed, spent time with my family, traveled all over the US to see my friends and helped as many people as possible travel abroad. But after seeing one to many instagram posts of Greece and racking up enough airline miles, I decided it was time to leave again. I realize most people would just go on a week vacation, but I wanted to really explore and get to know the places I was going, so I quit my job. Again. And I went abroad again. I couldn’t figure out a visa situation this time, so I went for travel.

I started in Athens, Greece, and glided across the glowing blue waters to island after island. I ate Greek salad everyday, cried (to myself) when I got the top bunk, walked on ancient ruins, tried to speak Greek, rented a scooter and couldn’t stop smiling. I went to Croatia and took a boat to Italy where I lived off spritzs. I did cartwheels in front of the Eiffel tower in France and met a friend I used to teach with in her hometown in Ireland. I slathered scones with clotted cream in England and saw a play all by myself. I remembered why traveling is so important to me, why meeting people from other cultures and never ever closing your mind exists. I made so many friends, learned so many words, heard different opinions, ate everything, fell in and out of love, watched the sunrise and the sunset, and when I finally had to come home, I knew what I wanted to do (kind of).

First, I knew I did not want to stay in Chicago. I wanted to move, and though I could not figure out a permanent visa situation abroad, I figured I could still move somewhere new in the US. So, I packed up what could fit in my car and I moved across the country to be by the ocean, which always makes me feel like I’m home. And as I have settled into my new California home, I have decided to go back to school to become a teacher. Fulfilling two dreams at once, getting to mold beautiful young minds and have a summer off where I can continue my quest to try all the cheese this world has to offer, attempt any and all activities with the potential for a broken bone and keep butchering new languages.

“I am not the same having seen the moon shine on the other side of the world.”

Kirsten is an ESL Kindergarten Teacher in Bangkok, Thailand. Sick of freezing winters, short summers, and an office with no window, she moved to Asia to teach and travel. She can be found on the back of a motorbike taxi hanging on for dear life, trying to order coconut shakes in Thai, or lounging by the pool. 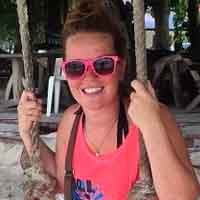