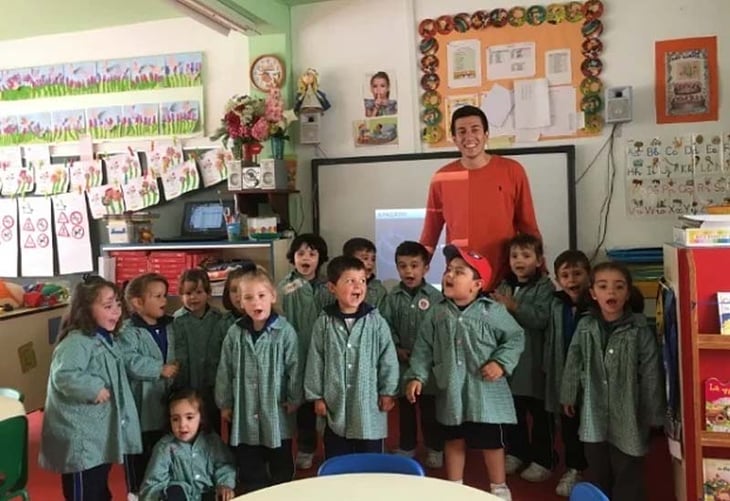 October, 2015. I was half-way through the fall semester of my junior year at the University of Maryland with winter break around the corner. My previous winter breaks had been nothing but boring and uneventful as I found it difficult to find a job for only a few weeks. I had no plans to study abroad as I was not as interested as other college students and frankly didn’t try to fit it in my schedule. My parents would have liked to have seen me study abroad, but again, I exhibited a lack of interest. This winter break would be different as I knew that I wanted to go somewhere because my college career would be completed within a year and a half. When else would I be able to travel without having to worry about the responsibilities and constraints of my adult life? After discussing with my parents and a distant cousin in Germany, I decided to book a ticket to Europe for the upcoming January. I would be going solo and viewed this as an experience to see the world and I guess the cliché “find myself”. I returned from my trip just in time for the spring semester and I discovered my true passion: traveling and seeing the world and its many cultures.

Within a year of returning from my trip, I had embarked on two major trips as I had truly contracted the travel bug. These trips including going to the land of my mother’s ancestors in Colombia with two friends. Then, a few months later, a second Euro trip with my college roommates the following winter break. As graduation neared, I knew I wanted to find a job that would allow me to travel as I did not want to let working and adulthood hinder my true love and passion for travel.

The summer of 2017 was spent struggling to find a job or even an internship until I finally secured a marketing internship for the fall of 2018 in which I was living in Washington D.C.

I tirelessly surveyed the internet looking for ways to travel and live abroad while also making money. I stumbled upon several articles and blog posts that pointed to teaching English abroad. At first, I was not too interested as I knew I did not want to be a teacher. However, my mom, who also loves to travel, convinced me that teaching English abroad is a great way to see the world and live in another country. After some thought, I knew getting my TEFL certification would be my ticket to live and work abroad. I decided it would be a great opportunity and I enrolled in the online TEFL course. My experience with the online course was great as I was working full-time, and the online component of the class allowed for me to work at my own pace to meet deadlines. I learned a lot of valuable information that I believe I was able to incorporate in my job. After completing my TEFL course in November 2017, I was ready to begin my job search.

At this time, I really wanted to go somewhere that was a shorter contract and in a Spanish-speaking country as I wanted to refine my Spanish as well as to immerse myself in the culture. Spain became my number-one target as I had been before and wanted to live there as part of the study abroad experience I never had. Using job boards provided by ITA, I subscribed to list serves that sent out numerous contracts daily to the regions that I wanted to apply to. I received an alert from UP International, a Spanish recruiting company based in Pamplona, Spain.

I filled out my preliminary application with UP and immediately received an interview. After interviewing, I received a contract to work as a language assistant with a school located in the Andalusia region of Southern Spain to start in January and finish through May. However, within a few days, I received word that the position had dissolved for whatever reason. I was very disappointed as I believed it to be an awkward time to secure a position. Then after a few days, I received word that I had been given the opportunity to interview for another position, this time in the autonomous community of Galicia in northwest Spain in the coastal town of Ribeira. I immediately interviewed and was offered the position the following day. Much like the Andalusia position, I would work as a teaching assistant until the end of May as I would be replacing another teaching assistant whose contract was supposed to be October through May. I would be living with a single mother, Gloria, and her 7-year old daughter, Sara. I was excited to get my Spanish adventure started.

I arrived in Spain mid-January, nearly a month after I was offered the position as I had to work with the Spanish consulate to secure my visa. I immediately fell in love with the landscape as the town of Ribeira is located right on a bay that feeds into the Atlantic Ocean. After meeting my host family for the first time with open arms, I knew my experience would be worth all my hard work. Gloria and Sara did not speak any English, so I would have to practice my Spanish everyday which was an added bonus to my experience.

At my school, La Milagrosa Colegio, I worked with every single student (ages 3-16) in the school in some capacity throughout the week. With the primary students, I worked with each class twice a week through English and science. I worked with the infantile children (ages 3-6) once a week, and it was the same for the ESO students (4 levels following the completion of primary). I worked with five different teachers across the different levels, which I found beneficial as I was able to observe different teaching styles. I would read for some teachers working on pronunciation and fluidity while participating in more kinesthetic exercises with the younger children. With the ESO students, I was given the opportunity to lead the class through games and other fun activities.

Luckily, my school’s classrooms were equipped with computers and interactive boards. Therefore, I prepared PowerPoints describing my life and for games including Jeopardy and Taboo. It was great to be able to essentially gain the experience as an actual teacher while still acting as a language assistant. Additionally, every day, I had a different group of students ranging from the 6th of primary to the 4th of ESO for an allotted speaking hour. This is where I gained valuable experience as a teacher as I led these sessions solo without any teacher to supervise. Although every day had its ups and downs, I will forever cherish this teaching experience as it allowed me to work with kids of all ages through a variety of teaching styles and approaches.

My teaching experience combined with the home life made my time in Spain some of the best months of my life. We did something together every week ranging from going south of the border to Portugal, going zip lining, and literally becoming part of the family. By the time I finished my contract I was truly sad to leave my host family as I now view them as lifelong friendships and frankly, Sara is my little sister. I know for a fact that I will be keeping in touch with Gloria and Sara for the rest of my life because of how special my relationship is with them.

For those interested in teaching English in Spain, I would highly recommend using UP International as a recruiter. For those still unsure of where to look for a contract, I can’t recommend Spain enough. The country is so diverse with each autonomous community having something special to offer. I am happy to answer any questions about my experience as I loved it so much that I am looking for another contract in Spain. I would have never pictured myself teaching English in Spain, let alone in Galicia. But, I am truly thankful to have had such an amazing experience and to have met some amazing people.

I am happy to announce that I will be continuing my Spanish adventure come next month as I have accepted a position again with UP International to return to Spain, this time in Barcelona. I am ecstatic to be returning to such an amazing country and cannot wait to get started and such a different Spanish community. Here’s to many more amazing experiences come October 1!

Matt is 23 years old originally from Carroll County, Maryland. For those familiar with the state of Maryland, Matt lives about 30 minutes north of the city of Baltimore. Matt attended the University of Maryland and graduated with a bachelor’s degree in communication on the public relations track. He spent six months as a teaching assistant in the autonomous community of Galicia in Spain.