What is your citizenship?
USA

Where are you from?
Murfreesboro, TN, USA

What is your education level and background?
Master's Degree

What sparked your interest in teaching English abroad?
I am a classically trained musician and worked in the industry professionally for 12 or so years. I was getting a little tired of the music business and wanted a change. Was thinking of going back to school to study Spanish and decided on working as an English teacher in a Spanish speaking country so I could learn for free.

What city and country did you decide to teach English in?
I am currently teaching English in Mexico City, Mexico.

What did your friends and family think about you moving and teaching abroad?Friends supportive, family was concerned about my safety... but now they're fine since I've been here for 6 months and haven't encountered any problems.

What were some of your concerns about teaching abroad?
Settling in, culture shock, getting around with only high school (basic level) Spanish in a country of 9 million people.

What resources did you find helpful when deciding where to go?
Friends that had done it before, ITA enrollment advisor, making contacts with Mexican nationals and them giving me an idea of what it's like living here.

Please give your thoughts on dating abroad.
I found it harder dating in the Italian region of Switzerland than in Mexico. Where I lived in Switzerland, most of the gay people were just interested in hooking up and not really in developing a real relationship. In Mexico, certainly hookup culture is strong, but there have also been a lot of nice guy that genuinely just wanted to find a relationship and settle down into something. Some years ago I met a nice guy on one of the dating apps, who is Mexican and lives in Mexico City, and we met once I moved here. After some time of being friends we now live together. I've met his family and spent Christmas with them, so it's been a good experience.

Was there anything about being a member of the LGBTQ+ community abroad that was unexpected?
Mexico City is very gay-friendly. You can see gay/lesbian couples sharing PDA just as often as the straight couples and no one looks twice at it. I've watched to see how people react, and it seems to be just a normal part of life. There's a pride parade, a "gay neighborhood" (Zona Rosa) where everything is covered in rainbows, pride stores, etc. It's super gay friendly here! Though my partner in crime told me when we go to smaller towns and villages that it's not as friendly and we'd have to use caution when showing PDA.

Did being a member of the LGBTQ+ community have an impact on where you decided to teach English?
Not really. Wherever I am I'm going to try to live my life to the fullest and be happy. But, having my friend here and sharing experiences (about living in CDMX and being gay) with me definitely helped.

Did you come out while living abroad? If so, how did your host country and experience influence that decision?
I've been out since I was 14, and not many people ask me about it. I'm very open about my life. I have students that talk about their gay best friend, meeting their gay uncle's new boyfriend at Christmas, etc. It's just not that big of a deal here, which I'm very grateful about.

Tell us about finding your community abroad.
I'm still working on that... outside of said partner I don't have a social life. Occasionally we'll meet up with some of his (girl) friends, but I don't really have other friends. I work in the afternoons and the evenings until 9 so I only have mornings, Friday and Saturday evenings, and Sundays free. But, he told me we have a new neighbor that's really friendly and wants to have get togethers. I haven't yet met up with the American expat community (mostly because I want to throw myself into speaking Spanish outside of school) but I'm sure once I do my social life will be much more full.

What are some of your most memorable experiences teaching English abroad?
We took a day trip to some "pueblos magicos" one Sunday with his friends, aunt, and cousin. That was very fun! I'm looking forward to more day trips to archeological sights, museums, other cultural activities. I enjoyed being in the Zocalo for Dia de Muertos. Since I've only been here for 6 months, I still have a lot to experience.

Did you find that locals had any stereotypes? Or did you have any stereotypes about the locals?
I thought it was very funny that at Christmas everyone was blasting Banda, which is the music that we're used to hearing in the Mexican restaurants. I thought before "surely they just do this at the restaurants because it's stereotypical" but no! People really love that music and know all the songs! I had a great time learning a few dances from his cousins at Christmas too. My students enjoy learning about American culture when I talk about my family, how they love to have cookouts and eat cheeseburgers... so I guess there are some stereotypes that are true. But let it be known that the Mexican stereotype of tardiness and bureaucracy, especially at the immigration office, are totally true.

Were there any cultural boundaries you found to be different than your home country? If so, please explain.
When you make plans with people and something to do with their family comes up, they will drop your plans with you (without letting you know) to have their family time. I found this very frustrating with someone that I was dating for a while- and while I know that it's a cultural difference, a little bit of warning or being told that plans were cancelled would have been nice. Mostly, things are pretty similar between the US and Mexico, at least from what I've experienced. My only problems at this point have been because of language limitations or just not communicating well enough.

What are your thoughts on safety in your host country abroad, as a member of the LGBTQ+ community?
I haven't experienced any issues. I've never been bothered in any way, for being gay or for being from the US. Everyone is very friendly. If I lived in another part of the country or in one of the towns/villages, that might be a different story. I always proceed with caution in every situation or location and always judge my actions based on surroundings.

Have you participated in any Pride celebrations abroad?
Not yet! Maybe next year.

Do you have any advice for people planning to move abroad to teach English?
Don't believe everything you hear on the news! Mexico is a very friendly and hospitable country. There are some rough areas, as far as crime and how we would compare their living standards, just like in every country/city, but overall it's a great place. 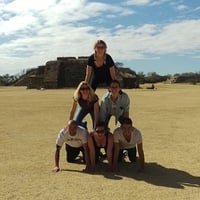