Japan is a nation known for its fantastic festivals and annual celebrations, but perhaps none is more famous than the festivities that accompany the arrival of the cherry blossoms each spring. From late March through early May, cherry blossoms bloom across Japan, welcoming spring with a burst of color unlike any other. For those teaching English in Japan, the arrival of the cherry blossoms is a certain highlight of their stay in Japan, one of the top job markets in Asia and the world for teaching English abroad.

The beauty of the cherry blossom is a potent symbol of spring and rebirth in Japanese culture that has been celebrated throughout the ages. There are a variety of cherry blossoms, but the most popular and celebrated in Japan is a variety known as sakura, which does not produce fruit.

Cherry blossom season in Japan generally begins in southern Japan in late March.  Every year the Japanese Meteorological Agency tracks the cherry blossom season as it moves northward up the archipelago with the arrival of warmer spring weather. It commences in the subtropical island of Okinawa and typically reaches Kyoto and Tokyo at the end of March or the beginning of April, arriving in the northern island of Hokkaido several weeks later.

The Traditions of Hanami

The term Hanami refers to the thousand year-old Japanese custom of celebrating the blooming of cherry blossoms (and sometimes plum blossoms) and the rebirth of spring. Hanami literally means “flower viewing” and traditionally is celebrated over a picnic, perhaps a bottle of sake, or simply relaxing amidst the blossoming trees in a local park or garden with friends, family or a significant other. In addition, throughout spring in Japan, Hanami Festivals are held across the nation.  Here some of the most famous locales for enjoying cherry blossoms across Japan: 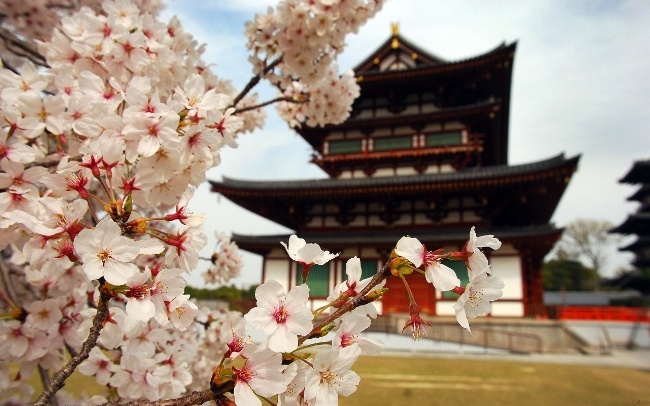 Each spring the stunning natural beauty of the spring cherry blossoms becomes intertwined with the rich and ancient culture of Japan to produce an spectacle like no other. Teaching English in Japan provides a once-in-a-lifetime opportunity to experience this amazing combination of culture and natural beauty as a local!

Want to Learn More about Teaching English in Japan & Around the World?

Request a free brochure or call 773-634-9900 to speak with an expert advisor about all aspects of teaching English in Japan and around the world, including TEFL certification, the hiring process, salaries, visas and more.